Skip to content
Have you checked out our french game kits for kids? 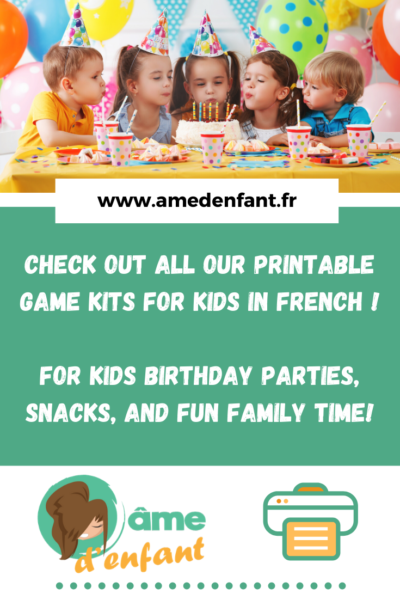 To organize a birthday party, you need to plan both indoor and outdoor birthday games. This helps to structure the party and keep the children busy throughout the day. To help you, here are some ideas for birthday games.

For a birthday party to be successful, you need to plan both outdoor and indoor birthday games. This will help to structure the party and restore calm. If your child was born in the winter or if you don’t have a garden where you can organize his birthday party, don’t worry, there are many indoor and outdoor birthday games that can be organized.

For small children, you can offer them the game of the mole and the grasshopper. This game is very popular with children.

There is also hide-and-seek upside down. This game is distinguished by the fact that only one child is hiding and all the others are looking for him. Indoor games also include Princess Prisoner, Musical Chair and many others. There are many indoor games, but the most important thing is to know how to organize them so that they are successful.

In this hide-and-seek game, only one person is hiding, so all the other players have to look for him. The aim of the game is to find the person who is hidden but blindfolded (without blindfold for the smaller ones in variant).

So when one of the players find the mate he doesn’t say so, but hides with him, so the number of children decreases as the game progresses. The children have to stay in the same hiding place as the first hider. After a while it will become easier to find the other children who are all hiding in the same place. The child who will be the last to find all the other players will be the one who has the right to hide!
Birthday Party Games

The object of this game is to rescue a princess who is trapped, not in a tower, but in a chair. Indeed, here one of the players will be chosen to represent a princess in danger. This player will be attached to the chair in the following way: hands tied behind the chair, and each foot tied to one foot of the chair (the two feet in front). One knot is enough, it must be fairly tight (no double knots except to make the game more difficult).

To guard the princess, a fierce dragon takes turns being personified by a player. He will have the role of defender of the tower, and he will have to try to hit anyone who approaches the princess. Finally, the valiant knights (all the other players) will stand in a semi-circle in front of the princess and the dragon (within a perimeter of 1 to 2 meters). The game leader will then ask a knight player to try to undo the knots of the princess, if he is hit by the dragon he must leave and another player takes his place.

If time permits and you have a sufficiently large garden, it is best to organise the birthday party outside. For activities, children can play hopscotch or open hunting. There are several birthday games that can be organised outside, such as the treasure hunt. This game can be organised both indoors and outdoors.

The game can be played indoors as well as outdoors. To make it a success, you have to have a short story to start with, riddles and hiding places. If you lack inspiration, there are several treasure hunts that you can print out online. However, you can organise a treasure hunt yourself by choosing your own theme. The police investigation can also be a great activity to keep the children occupied during a birthday party. It consists of solving

If you enjoy our blog, you can also read:

This site uses Akismet to reduce spam. Learn how your comment data is processed.